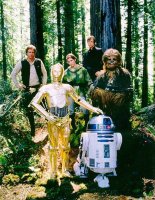 This is old news by now but it is something that I recently found out about. Grizzly Creek Redwoods State Park, home of the Owen R Cheatham Grove where the speeder bike chase sequence was filmed in ROTJ, came close to being shutdown and is still in jeopardy for the future.

On January 10, 2008 Governor Arnold Schwarzenegger released the proposed FY 08-09 state budget that proposed to close 48 state parks. You can read more about it at the California State Parks Foundation.

The parks were saved from the chopping block later in the year as seen reported on the Save Our State Parks Campaign website and The Times-Standard of Eureka, CA.
”The Legislature's passage of a final state budget avoids the closure of California's state parks - at least for this year... . But the story isn't over. Unfortunately, this budget leaves our parks vulnerable to another uncertain fate next year.”

In other more positive news, Kelley Atherton at The Daily Triplicate wrote an excellent 3 part series about the filming that took place at the Smith River location.

In 2004, my girlfriend and I made a tour through Mexico. We crossed the country from Mexico City to Cancun, visiting tens of ancient Maya sites. We extended our vacation with a trip to Yavin IV, aka Tikal - Guatemala.

We didn't stop there. We have successfully travelled to Middle Earth and The Matrix.

My Star Wars : A New Hope page has been updated with lots of Tunisia set photos and movie reference pictures. With many thanks to Mark Dermul, who organized 3 Trips to Tatooine (Tunisia).

Here is a version that was archived before it went down, click here.

Here is a version that was archived before it went down, click here.
Rating: 0.00/5 (0 votes cast)

In Sevilla, Spain (or Seville for you Anglophiles), you will find the Plaza de Espana, a location seen in Attack of the Clones. While it was only in the film for a few moments, you may explore the site at your leisure, and it's completely free!