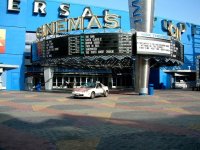 My first outing was in 2000 to the lot of 20th Century Fox Studios. There is a large mural of the Luke Skywalker vs. Darth Vader lightsaber battle covering the entire side of one of the studio buildings. They don’t give tours here so I wasn’t able to get too close but it is still very clear from outside the gate. I went to see a taping of an episode of Dharma and Greg the next year and was guided right by the mural on the way to the show but cameras weren’t allowed in so I couldn’t get a close-up shot that day.

In March of 2003 I had a lot of free time on my hands so I planned a couple of days finding things on my list around LA. There isn’t much to say about any of these locations really. I just got on my motorcycle and rode around trying to find everything. I wasn’t able to get to the footprints at the Mann Chinese theater since they were setting up for a premiere later that night. At USC I went to the admissions office and signed up for the official tour but you should just be able to go straight to the school of cinema if you want. When I visited the original ILM building in Van Nuys, the address number from Star Wars Insider didn’t match the building I found, but I did talk to someone there who was sure that it was the right one. Most of the following locations were taken from many sources including Empire Building, Star Wars Insider, The Making of ROTJ, Skywalking, Biography of George Lucas, The Art of Special Effects, and others. Also for some of these places, I’m not 100% sure I found the right place so if you see anything that is wrong, please let me know.

UPDATE: The Academy of Motion Picture Arts and Sciences screened Star Wars with cast and crew in attendance at their "Great To Be Nominated" series. In the transcript available on starwars.com it shows Grant McCune saying the ILM location was at 6842 Valjean. My original notes had 6842 also but I changed it after talking to someone in the 6846 building who was sure of it being the correct location.

Another friend of mine later told me that the actual location for the Cantina pickup scenes is on La Brea Blvd in a small, run-down sound stage. In Hollywood

SW4 - "The screening of Star Wars for cast and crew came three weeks later, on May 21”
The Academy of Motion Picture Arts and Sciences, 8949 Wilshire Boulevard, Beverly Hills

Lucasfilms first offices: 3900/ 3855 Lankershim blvd. - Across the street from the Lankershim entrance of Universal Studios will soon be the Redline subway station, which is the former site of the Egg Factory office building.

"The Star Wars office moved across the road from Universal to a small office on Riverside Drive in North Hollywood."

During his time at USC Lucas rented a three story wood frame house on Portola Drive, in the hills above Beverly Hills